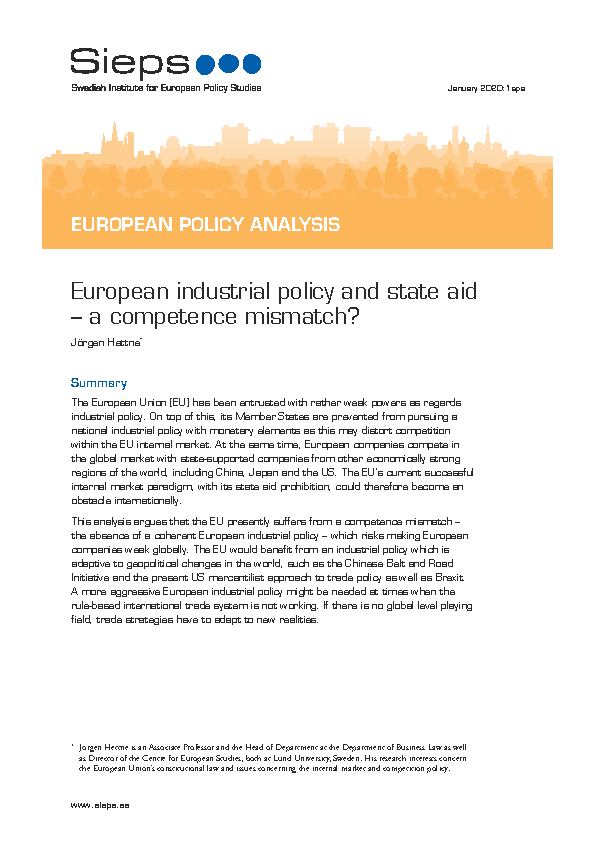 Enhancing the competitiveness of European companies globally has not been an explicit aim during the history of European integration. Instead, the cooperation has mainly fostered internal competition within the EU, with the aim of generating competitive companies, low consumer prices, high quality products and innovation.

In the absence of strong global competition, this problem was limited. But as the share of global EU exports is decreasing – for example in favour of state-owned or subsidized Chinese companies – some Member States want the EU to take the global playing field further into account.

In this analysis, Jörgen Hettne, Associate Professor at Lund University, describes the competences in the field and the EU’s response to the new geopolitical realities.

As regards industrial policy, the Member States hold the main powers but are also circumscribed: the ban on state aids distorting internal competition makes it hard to focus on domestic interests. The EU lacks competence in this area, but the Union has recently shown acceptance for nationally oriented policies by allowing exceptions to the state aid ban. These decisions are often environmentally motivated; however, global competitiveness is also explicitly considered.

The result, according to the author, has become a hidden policy that should be transformed into a more coherent and visible EU industrial policy. As the analysis shows, such a policy would to some extent be possible to adopt under the present treaty. It would however be more effective to strengthen the competences for the EU, which would require a change in the Treaty. The importance of linking the industrial policy to the EU’s trade policy is also underlined.

In conclusion, the Member States do not seem to have anything to lose in strengthening the Union’s competence regarding industrial policy – new realities demand new strategies.