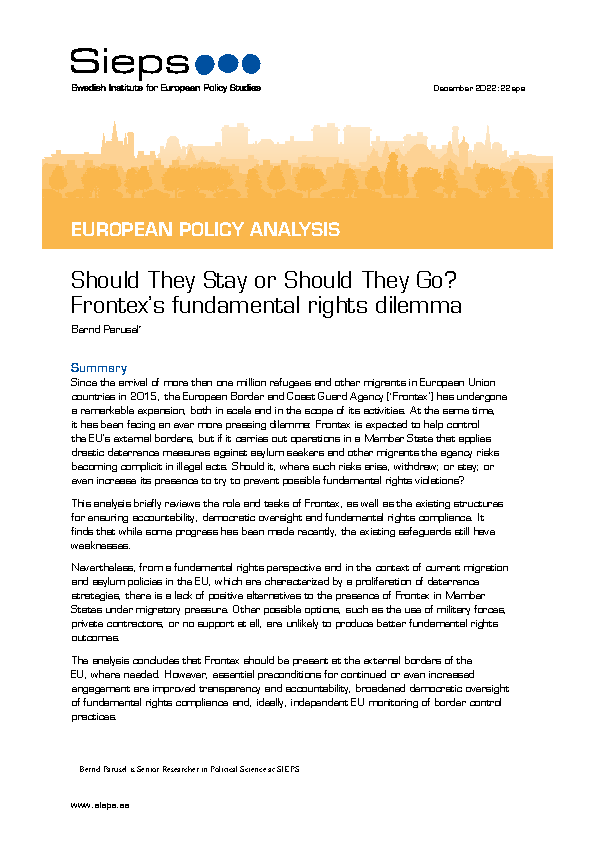 Since 2015 the European Border and Coast Guard Agency (Frontex) has expanded significantly in mandate, tasks, resources, and staff. But problems have proliferated, too. A new executive director is currently being selected to replace Fabrice Leggeri, who resigned in April 2022 over accusations of misconduct and a lack of transparency and accountability at the agency. Frontex has also been widely criticized for complicity in so-called pushbacks of asylum seekers from Greece to Turkey.

Frontex’s mission is to work alongside national border agencies to ensure ‘safe and well-functioning’ external borders. In doing so it must observe both EU and national laws. This is not always easy: if it carries out operations in a Member State that applies drastic deterrence measures against migrants, such as pushbacks, it risks becoming complicit in illegal acts. This leads to a dilemma for Frontex and its political masters: should the agency, where such risks arise, withdraw, stay, or even increase its presence?

In this European Policy Analysis SIEPS Senior Researcher Bernd Parusel reviews Frontex’s role, and the existing structures for accountability, democratic oversight and ensuring fundamental rights compliance. While certain improvements have recently been made, such as a higher profile role for the agency’s Fundamental Rights Officer and the recruitment of many more Fundamental Rights Monitors, the existing structures still have weaknesses. This is by no means the responsibility of Frontex alone, however. If the external borders of the EU are not to be zones of lawlessness, oversight bodies, politicians and the public must scrutinize what is happening there.

What would happen if Frontex were to withdraw? Parusel argues that there no good alternatives to Frontex supporting Member States under migratory pressure. Other possible options, such as the use of military forces, private contractors, or no support for national border agencies at all, are unlikely to produce better fundamental rights outcomes. He therefore concludes that Frontex should be present at the external borders of the EU, where needed. However, essential preconditions for such an approach are improved transparency and accountability for Frontex, broadened democratic oversight of fundamental rights compliance and, ideally, independent EU monitoring of border control practices.