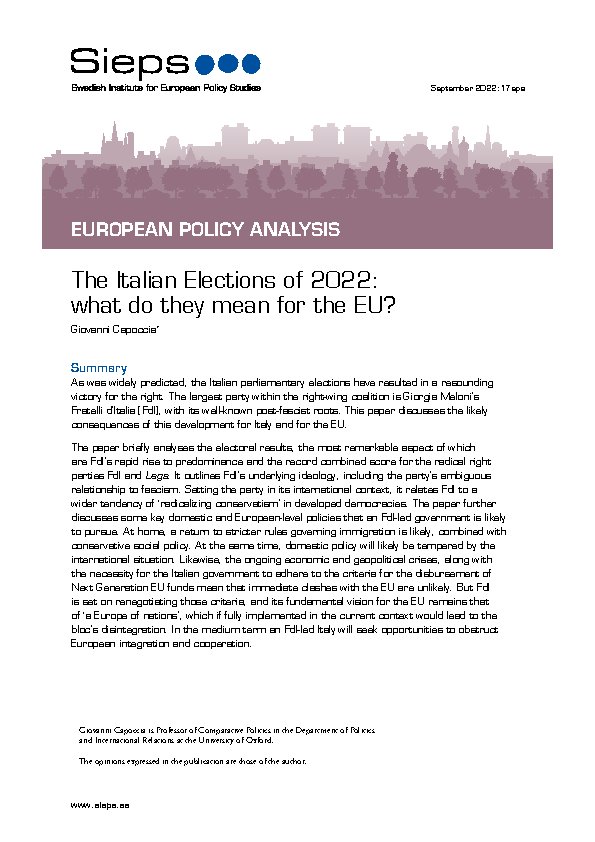 This year’s elections saw the rapid rise of Fratelli d’Italia (FdI), the decline of Lega and Forza Italia, and a poor showing by the centre-left. Capoccia considers the results in detail, along with their causes, notably the failure of the centre-left and the centre to build the coalition that would have been needed to win first-past-the-post seats.

FdI’s ambiguous relationship to fascism is well-known. But from an international perspective, the party can be seen as part of a wider tendency of ‘radicalizing conservatism’ observable in many other developed democracies, including within the EU. Parties of this stripe generally seek to limit checks on executive power, they oppose immigration and European integration, and they are socially conservative.

What will this mean, in policy terms? Domestically, a return to stricter rules governing immigration is likely, combined with conservative social policy. At the European level, the party’s Eurosceptic instincts will be tempered by the need to secure the disbursement of the remaining Next Generation EU funds: immediate clashes are unlikely. In the medium term, however, we should expect Italy to be an obstructive player, seeking to delay and frustrate further integration.