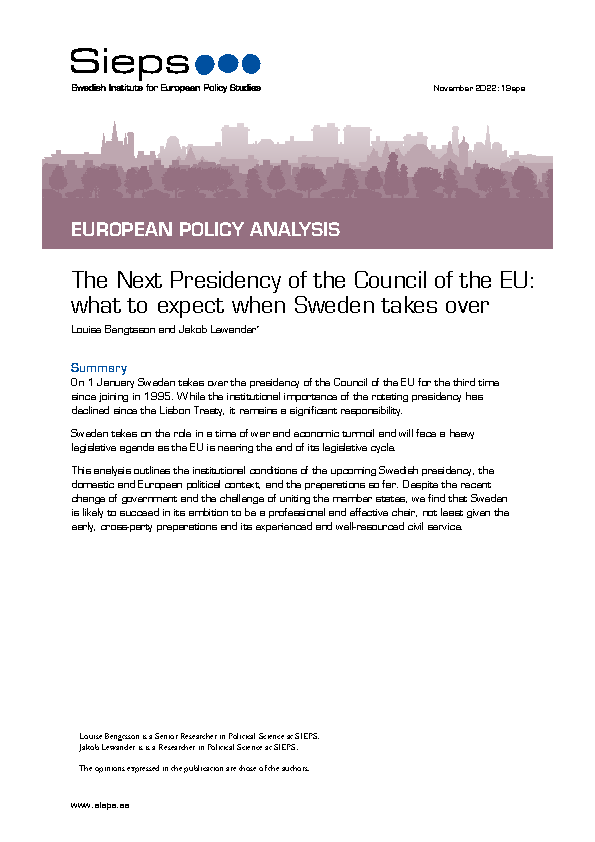 Sweden embarks on its third Council presidency, the country is well experienced and can be said to have made a mark in several policy areas since it joined the EU in 1995. During the presidency the holder plans and chairs approximately 2000 Council meetings mainly in Brussels, represents all other member states in negotiations with the Commission and the European Parliament, and can, to a limited extent, promote its EU policy priorities.

Sweden’s policy focus will be finally confirmed in December but there is likely to be emphasis on areas such as security and the EU’s role in the world, climate change and competitiveness. However, the ability of the presidency-holder to set – rather than to merely structure – the agenda has been much reduced since Sweden last had the role, in 2009. And this presidency falls towards the end of the EU’s legislative cycle, meaning a packed schedule of texts to be agreed and/or negotiated, with less room for new initiatives than there otherwise might be. Furthermore, all recent presidencies have been forced to manage member state coordination during external shocks and their consequences, and Sweden’s presidency will likely be no different.

In this analysis, the first of a series of SIEPS publications on the Swedish presidency, the authors describe these international and institutional conditions, as well as the domestic political context. The new government relies on support from a historically Eurosceptic party and must rapidly get up to speed on a wide range of policies and the positions, with respect to them, of the member states, the Commission and the Parliament. Among the ‘files’ are some which could prove controversial at home.

The government will be helped by the longstanding and widespread Swedish consensus on many EU policies, and by a capable and adequately resourced civil service. Therefore, despite the ever-present possibility of crisis, one can expect Sweden to succeed in its ambition to be professional and effective chair, and that it will be to a certain degree able to advance its priorities.