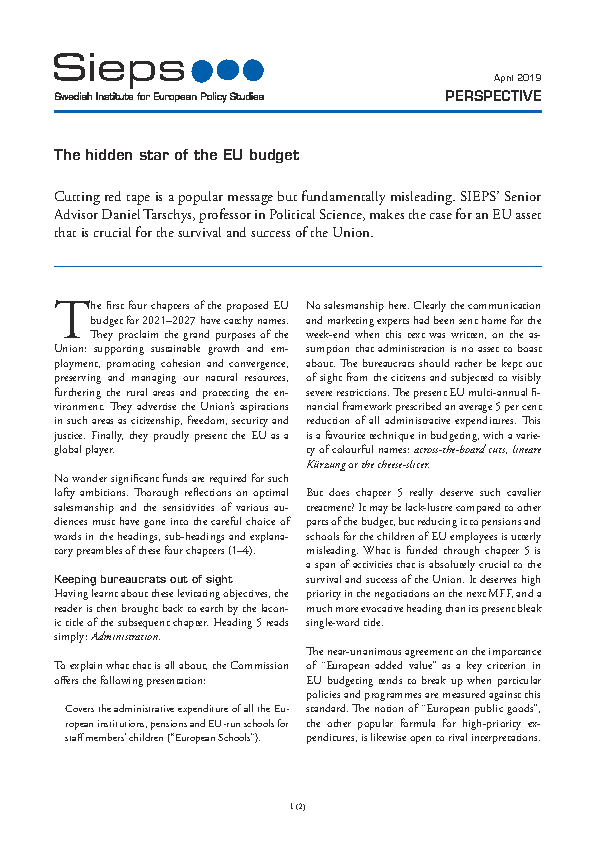 Cutting red tape is a popular message but fundamentally misleading. SIEPS’ Senior Advisor Daniel Tarschys, professor in Political Science, makes the case for an EU asset that is crucial for the survival and success of the Union.

The first four chapters of the proposed EU budget for 2021–2027 have catchy names. They proclaim the grand purposes of the Union: supporting sustainable growth and employment, promoting cohesion and convergence, preserving and managing our natural resources, furthering the rural areas and protecting the environment. They advertise the Union’s aspirations in such areas as citizenship, freedom, security and justice. Finally, they proudly present the EU as a global player.

No wonder significant funds are required for such lofty ambitions. Thorough reflections on optimal salesmanship and the sensitivities of various audiences must have gone into the careful choice of words in the headings, sub-headings and explanatory preambles of these four chapters (1–4).

Keeping bureaucrats out of sight

Having learnt about these levitating objectives, the reader is then brought back to earth by the laconic title of the subsequent chapter. Heading 5 reads simply: Administration.

To explain what that is all about, the Commission offers the following presentation:

Covers the administrative expenditure of all the European institutions, pensions and EU-run schools for staff members’ children (“European Schools”).

No salesmanship here. Clearly the communication and marketing experts had been sent home for the week-end when this text was written, on the assumption that administration is no asset to boast about. The bureaucrats should rather be kept out of sight from the citizens and subjected to visibly severe restrictions. The present EU multi-annual financial framework prescribed an average 5 per cent reduction of all administrative expenditures. This is a favourite technique in budgeting, with a variety of colourful names: across-the-board cuts, lineare Kürzung or the cheese-slicer.

But does chapter 5 really deserve such cavalier treatment? It may be lack-lustre compared to other parts of the budget, but reducing it to pensions and schools for the children of EU employees is utterly misleading. What is funded through chapter 5 is a span of activities that is absolutely crucial to the survival and success of the Union. It deserves high priority in the negotiations on the next MFF, and a much more evocative heading than its present bleak single-word title.

The near-unanimous agreement on the importance of “European added value” as a key criterion in EU budgeting tends to break up when particular policies and programmes are measured against this standard. The notion of “European public goods”, the other popular formula for high-priority expenditures, is likewise open to rival interpretations.

But with no doubt whatsoever the items included under heading 5 rank high on both counts.

The European institutions produce an incredible amount of both European public goods and European added value. This goes not only for the Council, the Commission and the Parliament but also for the whole galaxy of surrounding and supporting bodies.

A high-quality court system allowing no delays, efficient auditors tracking down waste and fraud, evaluators assessing the outcomes of rules and policies, general directorates well-equipped to analyse options for future action and supervise the implementation of adopted decisions – these are invaluable assets for the smooth functioning not only of the Union itself but also of our national governments and economies.

Governance involves trial and error: some EU decisions will inevitably prove unwise and require modifications. We need good sensors and detectors to discover such errors and start thinking about alternative solutions.

In defence of efficient governance

Politicians and organisations contribute to that process, but so do also some 40 EU agencies. They are constant producers of European public goods, pure and unadulterated. Many of them are in a build-up phase but have nevertheless been subjected to the blind 5 per cent expenditure reduction requirement.

Since the Lisbon agenda, the European Union has advanced the “knowledge economy” as the basis for continent’s economic growth and social progress. Along this line, the Union itself should not hesitate to invest in various forms of analysis and institutional capacity. A lot of intelligence-gathering and critical scrutiny is conducted under the wide umbrella of “administration”.

With the European elections in sight, we can expect the usual doses of bureaucracy-bashing. But level-headed politicians should not give in to such temptations. For a well-functioning EU in the next seven-year period, they should be prepared to defend the need for an efficient system of European governance. A first small step might be to upgrade section 5 of the budget by renaming it “institutional development and administration”.