At a SIEPS seminar held on 26 paril 2019, Professor Simon Hix, London School of Economics, presented a forecast of the election results and their impact on the European Parliament, written together with Doru Frantescu, CEO of VoteWatch Europe.

The upcoming elections to the European Parliament are expected to lead to more votes for populist parties and a weakening of the biggest party groups. This means that a number of policy decisions could end up differently after 2019, for example in the environmental area.

The study is based on an analysis of ten key votes in 2014-19, to bring out the dynamics of shifting majorities in the European Parliament. The role of the party groups and the importance of their internal cohesion was discussed.

The upcoming elections to the European Parliament are expected to be more turbulent than previous elections. Forecasts are predicting more votes for populist parties in many countries as well as a weakening of the biggest party groups, the European Peoples’ Party (EPP) and the group of Socialists and Democrats (S&D).

What can we say about voter turnout in May, what should we expect in terms of turnout and protest votes and what could be the consequences for the functioning of the European Parliament?

Sofie Blombäck, lecturer in Political Science at the Mid-Sweden University, gave a Swedish perspective on the issues. Björn Kjellström, European Parliament, commented in the light of the European Parliament campaign This time I’m voting.

At a seminar in Stockholm, 8 March 2019, renowned experts and policymakers discussed the banking union from a Nordic-Baltic perspective. The seminar was arranged jointly by SIEPS and the Swedish inquiry on potential participation in the banking union.

The creation of the European banking union is a fundamental reform of financial governance in the EU, today comprising centralised supervision and resolution of banks. Even though it currently encompasses the euro area, the development of the banking union is also pertinent to both non-euro member states as well as to other European countries.

The banking union can be expected to impact both banking interlinkages and cooperation in the Nordic-Baltic region the future. Nordic-Baltic banking systems are highly interlinked, which is also reflected in the close cooperation between the region’s authorities. Today, the Baltic countries and Finland are participating in the banking union, whereas Sweden, Denmark and Norway are not.

In a public lecture 8 February 2019, Dr Adam Bodnar discussed various developments in Poland’s constitutional situation, and their potential implications for the country's relation with the European Union.Erik Wennerström, Doctor of Laws, specialised in the rule of law and the EU, was discussant. 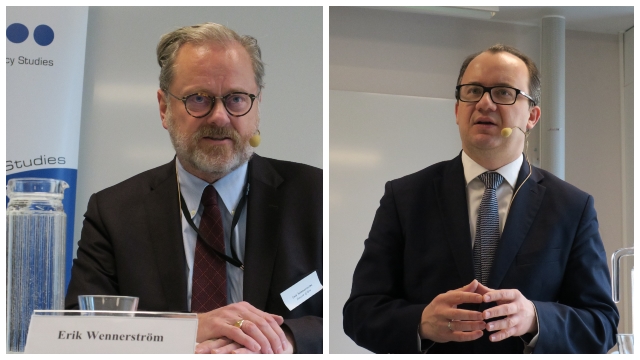 Over the past years, the Polish government has undertaken several legal and constitutional reforms that have met significant criticism from various international organisations.

The European Commission has, for the first time in EU's history, asked the Council to establish that Poland’s reform of the functioning of its judiciary represents a clear risk of a serious breach of the values on which the EU is based, particularly the rule of law.

What are the prospects for further European integration? How to address concerns of legitimacy and democracy in the EU? What is the status of common values inside the Union and how does that affect the EU’s global role?

Almut Möller is Head of the Berlin office together with Joseph Janning, and Senior Policy Fellow at the European Council on Foreign Affairs. Before joining ECFR she led the Europe programme at the German Council on Foreign Relations, and she has published widely on European affairs, foreign and security policy, and Germany's role in the EU.

The seminar gathered key perspectives on the future of the European Union, and resulted in an anthology published in the spring.

At our seminars, results from SIEPS reports and analyses are presented, discussed and analysed. All seminars are free of charge.

There is information about previous events. All seminars since 1 January 2017 have been filmed. The films are available when clicking on the plus sign next to the seminar headline.

If you have questions about SIEPS seminars in general or about a specific seminar, you are welcome to contact our Seminar Coordinator.