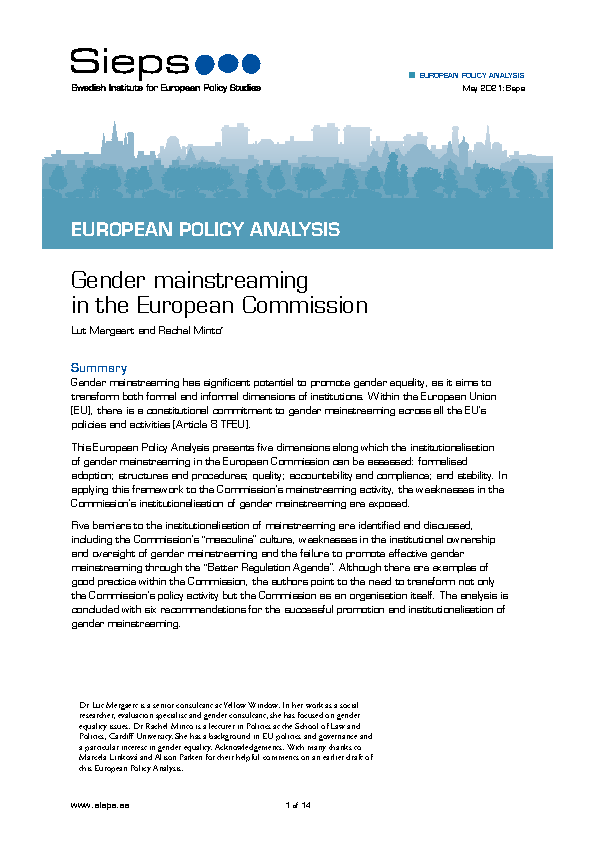 Within the European Union (EU), there is a constitutional commitment to gender mainstreaming across all the EU’s policies and activities (Article 8 TFEU).

In this European Policy Analysis, researchers Lut Mergaert and Rachel Minto discuss gender mainstreaming in the European Commission. While showing that mainstreaming has significant potential to promote gender equality, as it aims to transform both formal and informal dimensions of institutions, they also emphasize that the method results in better policies in general.

By using five dimensions along which the institutionalisation of gender mainstreaming in the European Commission can be assessed – and by identifying barriers to this work – the authors expose the weaknesses within the Commission in this respect.

Although there are examples of good practice, the authors point to the need to transform not only the Commission’s policy activity but also the Commission as an organisation itself.

The analysis is concluded with six recommendations for the successful promotion and institutionalisation of gender mainstreaming.

Lut Mergaert is a senior consultant at the management consultancy firm Yellow Window and Rachel Minto is a lecturer in Politics at the School of Law and Politics at Cardiff University.