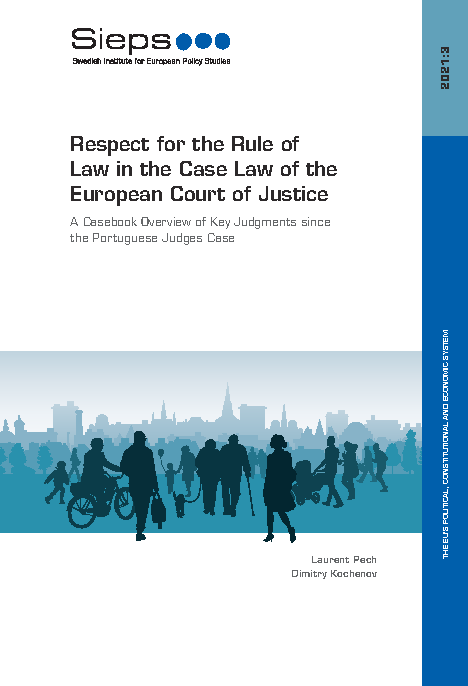 Over the past years, respect for the rule of law has decreased in several EU Member States. This regression affects the whole of the Union, as the rule of law is a founding value of the EU as a political community and a cornerstone of the Union’s legal order. The EU institutions have therefore taken measures to counter this regression, both by developing new tools and by using ones they did not need in the past.

In this report, Laurent Pech and Dimitry Kochenov, both professors of law, analyse the specific response of the European Court of Justice to the process of rule of law backsliding. The report, which follows a casebook format, consists of an in-depth examination of orders and judgments that have had a key impact on the status of the rule of law in the Court’s case law. The period covered is from February 2018 to July 2021.

This is the first time that the case law of the Court of Justice on the rule of law has been analysed in a comprehensive and systematic way, and the review is therefore the first of its kind.

In particular, the authors show that the Court has developed more detailed and binding standards for judicial independence. A more recent and important clarification is that Member States may not adopt laws and regulations that undermine the rule of law.

More generally, the rule of law has thus become enforceable at both national and EU levels, as the Court has clarified that all courts in the EU form part of the same system. This clarification has in turn deepened the Union’s constitutional nature.

While the authors point out that the Court of Justice has been the most active EU institution concerning the defence of the rule of law, they also observe shortcomings in the Court’s assessments. These shortcomings affect, among others, those who invest in a Member State without a functioning rule of law, and those who are extradited to such a Member State under a European Arrest Warrant.

Seen as a whole, the authors argue, this case law constitutes one of the most important developments in EU law since the 1960s. At the same time, they see limited possibilities for courts to influence societies that are moving in an authoritarian direction.

In the introductory and concluding chapters of the report, the authors provide a comprehensive analysis of the implications of the case law of the European Court of Justice on the rule of law. Chapters 2 to 6 contain both extracts from and detailed analyses of individual decisions or judgments. Summaries in English and Swedish can be downloaded below.