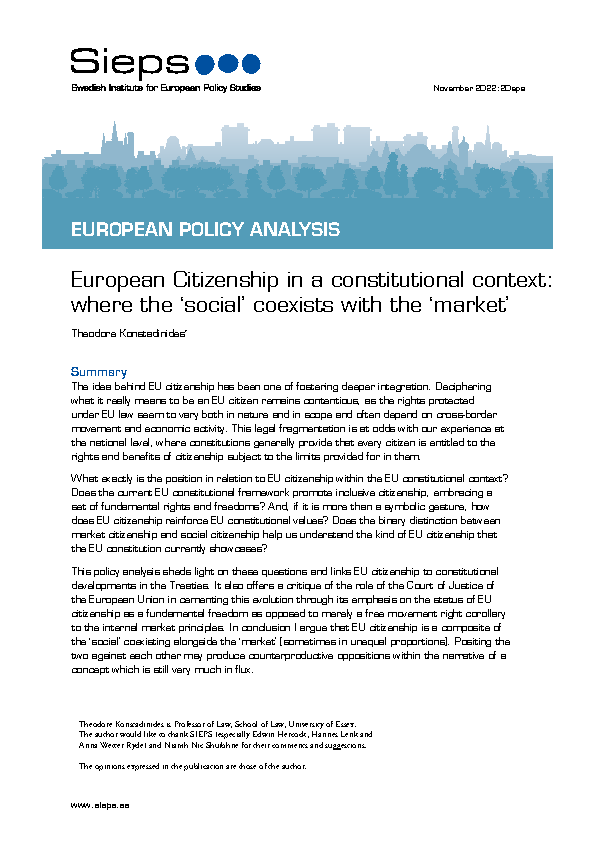 The roots of European citizenship rights can be traced a long way back in the case law of the Court of Justice, but it was the Maastricht Treaty, in 1992, which compounded these rights into the formal concept of EU citizenship. Decisions of the Court of Justice, directives and regulations, and then EU Treaties such as Maastricht and Lisbon have all contributed to the creation of a number of important political, democratic, mobility, and residence rights for member state nationals. In other words, citizenship – by any measure a core business of modern states – is one area in which EU members have agreed to partially relinquish their sovereignty; to give up full control.

As the formal introduction of European citizenship celebrates its 30th anniversary in 2022, it is timely to reflect on the development of this concept in EU law. In this new analysis for SIEPS, Professor Theodore Konstadinides of the University of Essex maps out the constitutional bases of EU citizenship and examines the decisions of the Court that defined the scope and content of those rights.

Unlike national citizenship, the rationale underlying the bundle of rights arising out of EU citizenship is accompanied by two different narratives. On the one hand, it can be understood as conditional on the cross-border economic activity of an individual. On the other hand, some rights are independent of an individual’s economic status. Commentators have described these two analytical frameworks as ‘market’ and ‘social’ citizenship. Konstadinides observes how these competing conceptions reflect a fundamental hybridity in the project as a whole. While the jurisprudence of the Court initially advanced the ‘social’ dimension, it has more recently emphasized the ‘market’-driven rationale –seemingly disciplined by opposition from member states unwilling to accept or implement the obligations bestowed on them.

Konstadinides suggest that these conceptions should not be understood as opposed, but rather equally legitimate rationales of EU citizenship that exist in parallel, describes these phases and considers the current state of play. He concludes that, though the transition from market-driven to full citizenship rights may be taking longer than some anticipated, EU citizenship as it is currently conceived by the Court nevertheless offers a core of social protection. EU citizenship is, thus, a significant achievement – forming part of the EU’s constitutional heritage and its future.

The publication will be presented at a webinar on 14 December. Read more here.