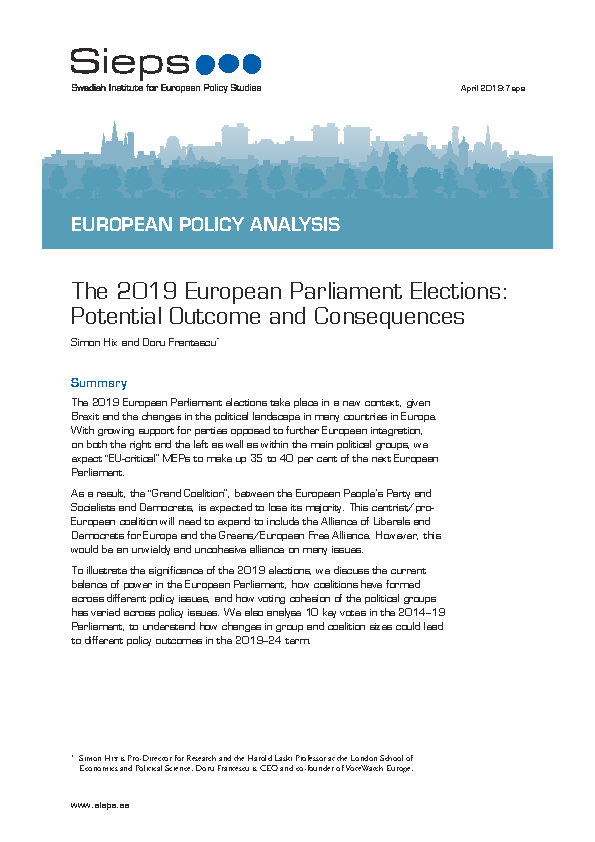 At a time when the EU needs to address important challenges, the European Parliament elections in May 2019 are expected to create fragmentation. Opinion polls predict a weakening of the dominant party groups (EPP and S&D), while both Eurosceptic parties and the liberal group (ALDE) are expected to grow. Overall, there is likely to be a slight shift to the right.

How could the predicted results change the policy outcomes in the next term as well as the role of the European Parliament?

To understand the potential consequences, the authors of this analysis discuss the balance of power, the coalition building and voting cohesion in the current parliament, as well as the outcome of ten key votes in 2014–2019.

Their analysis shows that the effects would be fragmentation, higher unpredictability and volatile majorities. The leadership of the parliament is likely to be weakened, while individual MEPs may have more margin for manoeuvre. For the European Commission, it may be more difficult to deliver on its policy agenda, while the parliament may be marginalized in negotiations with the EU governments in the Council. Ultimately, the risk is policy gridlock on the EU level.

Simon Hix is professor at London School of Economics, and Doru Frantescu is CEO of VoteWatchEurope.