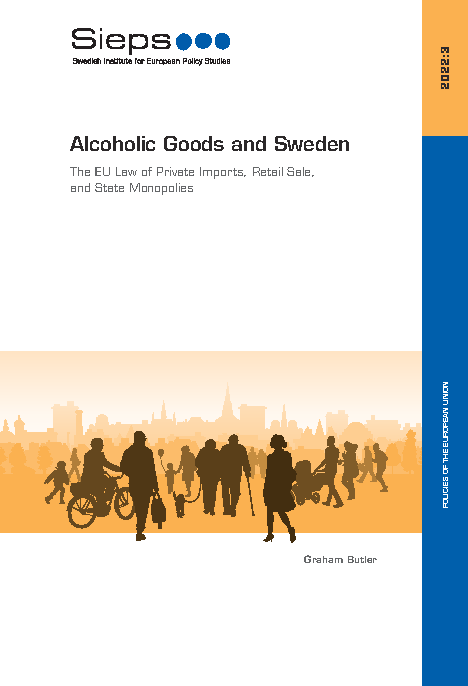 Sweden’s state-owned Systembolaget has a monopoly on the retail sale of alcohol, and Swedes are culturally and politically attached to it. But such monopolies necessarily restrict the circulation of goods on the internal market and are therefore essentially counter to the principle of the free movement of goods, a cornerstone of EU law.

Shortly after Sweden’s accession, this potential conflict was resolved by the Court of Justice’s judgment in the Franzén case. That landmark ruling set out the conditions which state monopolies must fulfil in order to comply with EU law and provided a lifeline for Systembolaget. This report asks whether, if it were tested, that lifeline would hold.

Butler describes how both CJEU case law and Sweden’s alcohol retail landscape have changed in the intervening years. The Franzén judgment emphasized the public interest justification for the monopoly, but in recent cases the court has shied away from that provision and put more weight on the general provision on the free movement of goods. And consumers in Sweden increasingly order alcoholic products from other Member States. These private imports are allowed under EU law but weaken the public health rationale of Systembolaget. A recent legislative proposal to allow the sale of alcohol by small-scale producers further undermines the public health objective and de facto discriminates against other producers.

The report concludes that these developments mean that the legality of Sweden’s retail monopoly for alcoholic drinks could be called into question. The partial liberalization of the sale of alcohol carries a risk that Systembolaget could be re-examined. Meanwhile, with the Court of Justice moving away from the test it relied on in Franzén, the legal justification for Systembolaget is considerably weakened.


Dr Butler's report was presented and discussed at a SIEPS seminar on 14 September; a summary of the event can be found here.