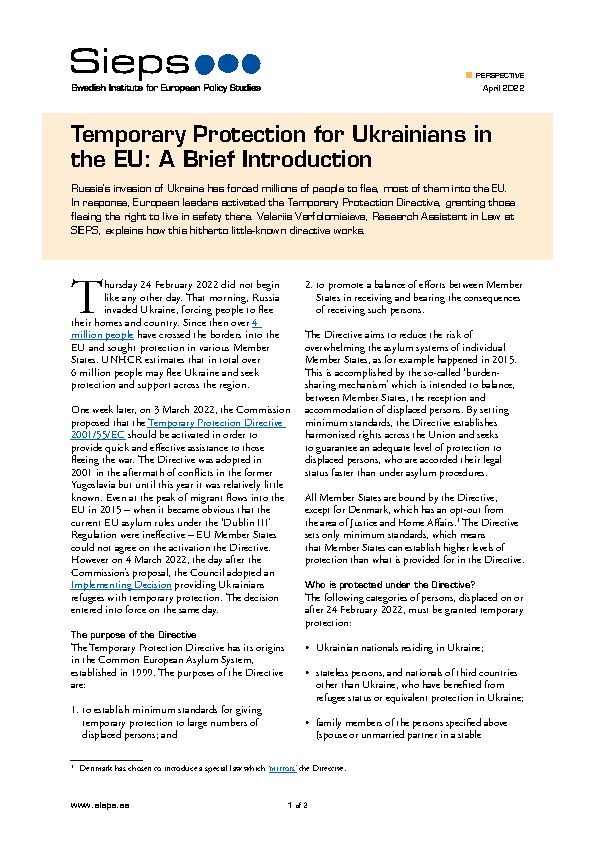 Russia’s invasion of Ukraine has forced millions of people to flee, most of them into the EU. In response, European leaders activated the Temporary Protection Directive, granting those fleeing the right to live in safety there. Valeriia Varfolomieieva, Research Assistant in Law at SIEPS, explains how this hitherto little-known directive works.

Thursday 24 February 2022 did not begin like any other day. That morning, Russia invaded Ukraine, forcing people to flee their homes and country. Since then over 4 million people have crossed the borders into the EU and sought protection in various Member States. UNHCR estimates that in total over 6 million people may flee Ukraine and seek protection and support across the region.

One week later, on 3 March 2022, the Commission proposed that the Temporary Protection Directive 2001/55/EC should be activated in order to provide quick and effective assistance to those fleeing the war. The Directive was adopted in 2001 in the aftermath of conflicts in the former Yugoslavia but until this year it was relatively little known. Even at the peak of migrant flows into the EU in 2015 – when it became obvious that the current EU asylum rules under the ‘Dublin III’ Regulation were ineffective – EU Member States could not agree on the activation the Directive. However on 4 March 2022, the day after the Commission’s proposal, the Council adopted an Implementing Decision providing Ukrainians refugees with temporary protection. The decision entered into force on the same day.

The purpose of the Directive

The Temporary Protection Directive has its origins in the Common European Asylum System, established in 1999. The purposes of the Directive are:

The Directive aims to reduce the risk of overwhelming the asylum systems of individual Member States, as for example happened in 2015. This is accomplished by the so-called ‘burden-sharing mechanism’ which is intended to balance, between Member States, the reception and accommodation of displaced persons. By setting minimum standards, the Directive establishes harmonized rights across the Union and seeks to guarantee an adequate level of protection to displaced persons, who are accorded their legal status faster than under asylum procedures.

All Member States are bound by the Directive, except for Denmark, which has an opt-out from the area of Justice and Home Affairs.[1] The Directive sets only minimum standards, which means that Member States can establish higher levels of protection than what is provided for in the Directive.

Who is protected under the Directive?

The following categories of persons, displaced on or after 24 February 2022, must be granted temporary protection:

Rights under the Directive

The Council Implementing Decision enables Ukrainian nationals, who have the right to move freely, without visas, within the Union, to choose the Member State in which they want to enjoy the rights relating to temporary protection.

Member States must issue residence permits for the entire duration of the protection affording immediate protection and rights such as access to employment, accommodation, social welfare or means of subsistence, medical treatment, education for minors, opportunities for families to reunite in certain circumstances, and appropriate information on their temporary protection. The Directive imposes special obligations regarding unaccompanied minors and persons who have suffered from torture, rape, or other serious forms of psychological, physical or sexual violence. A Commission Evaluation in 2016 concluded that these rights are more generous than those afforded by most national temporary protection regimes.[3]

After the end of temporary protection

The temporary protection should last for an initial period of one year unless terminated earlier by a decision of the Council. After the first year the Commission, tasked with monitoring the situation in Ukraine, may propose to extend the protection by up to a year (two six month periods). The Commission may also propose to extend it to an additional third year or at any time terminate the temporary protection, and the Council would decide on this using the qualified majority procedure. The Council’s decision should be based on whether the situation in the country of origin facilitates safe and durable return with due respect for human rights, fundamental freedoms and Member States’ obligations regarding non-refoulement.[4]

On the expiration of Temporary Protection Directive, the general laws on asylum and migration in the Member States continue to apply. The reference to the ‘general laws’ includes not only relevant national legislation, but also, for example, the ‘Dublin III’ Regulation, the Family Reunion Directive, and the Returns Directive. In other words, when protection under the Directive expires beneficiaries would be able to apply for refugee status, subsidiary protection and other national protection statuses in Member States.[5]

The Directive also provides beneficiaries with another important right: they may submit an application for asylum at any time. However, Member States are not bound to respond immediately, although examination should be completed after the end of the temporary protection period. After the expiration of the Council Decision, it is likely that many Ukrainian beneficiaries will not be able to return home, and will seek asylum. It is also likely that some persons benefitting from temporary protection will settle in the EU and will after expiration seek other forms of legal status, for example based on employment or the Family Reunion Directive.

It took a week for Member States to agree on temporary protection for Ukrainian refugees. In 2015, when the EU also faced an influx of refugees from armed conflicts, the Directive was not applied. The EU’s handling of the current migration situation – and its activation of the Directive for the first time in twenty years – provides an important background to the development of the new Pact on Migration and Asylum, presented by the Commission in September 2020.[6]

[1] Denmark has chosen to introduce a special law which ‘mirrors’ the Directive.

[2] The Implementing Decision applies differently to this category of persons: Member States may decide whether to afford them temporary protection or adequate protection under national law.

[4] According to Article 19 of the Charter of Fundamental Rights of the EU, the principle of non-refoulement means that no one may be removed, expelled or extradited to a state where there is a serious risk that he or she would be subjected to the death penalty, torture or other inhuman or degrading treatment or punishment.