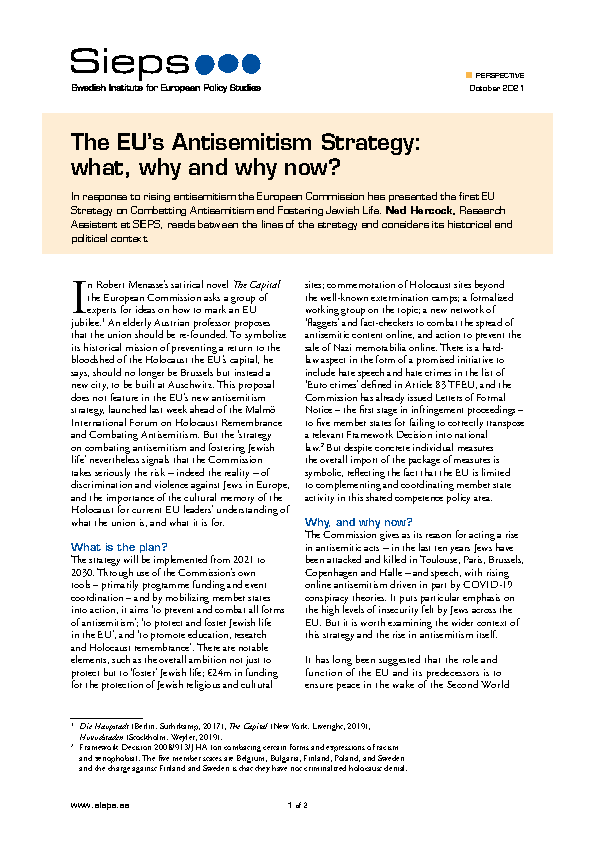 In Robert Menasse’s satirical novel The Capital the European Commission asks a group of experts for ideas on how to mark an EU jubilee.1 An elderly Austrian professor proposes that the union should be re-founded. To symbolize its historical mission of preventing a return to the bloodshed of the Holocaust the EU’s capital, he says, should no longer be Brussels but instead a new city, to be built at Auschwitz. This proposal does not feature in the EU’s new antisemitism strategy, launched last week ahead of the Malmö International Forum on Holocaust Remembrance and Combating Antisemitism. But the ‘strategy on combating antisemitism and fostering Jewish life’ nevertheless signals that the Commission takes seriously the risk – indeed the reality – of discrimination and violence against Jews in Europe, and the importance of the cultural memory of the Holocaust for current EU leaders’ understanding of what the union is, and what it is for.

What is the plan?

The strategy will be implemented from 2021 to 2030. Through use of the Commission’s own tools – primarily programme funding and event coordination – and by mobilizing member states into action, it aims ‘to prevent and combat all forms of antisemitism’; ‘to protect and foster Jewish life in the EU’, and ‘to promote education, research and Holocaust remembrance’. There are notable elements, such as the overall ambition not just to protect but to ‘foster’ Jewish life; €24m in funding for the protection of Jewish religious and cultural sites; commemoration of Holocaust sites beyond the well-known extermination camps; a formalized working group on the topic; a new network of ‘flaggers’ and fact-checkers to combat the spread of antisemitic content online, and action to prevent the sale of Nazi memorabilia online. There is a hard-law aspect in the form of a promised initiative to include hate speech and hate crimes in the list of ‘Euro crimes’ defined in Article 83 TFEU, and the Commission has already issued Letters of Formal Notice – the first stage in infringement proceedings – to five member states for failing to correctly transpose a relevant Framework Decision into national law.2 But despite concrete individual measures the overall import of the package of measures is symbolic, reflecting the fact that the EU is limited to complementing and coordinating member state activity in this shared competence policy area.

Why, and why now?

The Commission gives as its reason for acting a rise in antisemitic acts – in the last ten years Jews have been attacked and killed in Toulouse, Paris, Brussels, Copenhagen and Halle – and speech, with rising online antisemitism driven in part by COVID-19 conspiracy theories. It puts particular emphasis on the high levels of insecurity felt by Jews across the EU. But it is worth examining the wider context of this strategy and the rise in antisemitism itself.

It has long been suggested that the role and function of the EU and its predecessors is to ensure peace in the wake of the Second World War.3 That this was the true intention of the founders has been disputed, as has the EU’s importance as guarantor of peace, but it is nevertheless a widely accepted foundation story, told at the outset and told still. But this story focused on the military conflict. More recently the historic role has expanded from preventing a repeat of the conflict to (also) specifically preventing anything resembling the attempted extermination of European Jews – hence the professor’s idea of a new capital.4 There has thus been a shift in the foundational, justificatory narrative for the project in recent decades, and the new strategy should, on one level, be seen as part of this shift. It is in line with this shift that the strategy has Holocaust remembrance at its centre. This is a practical matter insofar as Holocaust denial or revisionism is a hallmark of post-war antisemitism. But when he unveiled it in Strasbourg last week Commissioner Margaritis Schinas also cited the moral legacy of the Holocaust as a reason for acting:

He further noted that the number of living survivors is dwindling. The Shoah slipping beyond the horizon of living memory could be a factor in the recent rise in antisemitism, but why should it be for the EU, rather than member states, to keep that memory alive as others try to distort it? One reason is that the Jews, Roma, trade unionists and LGBT people who died at the hands of the Nazis and their supporters were from all over Europe (and especially from territories now belonging to Central and Eastern European member states).

It is notable that it was Schinas, Vice-President for Promoting our European Way of Life, who first presented the strategy. His controversial job title – changed from ‘protecting’ to ‘promoting’ before his term began – has been seen as evidence of the EU taking a ‘civilisational’ turn.5 Reading between the lines of the strategy, in this context, one can see a recognition of the bad, as well as the good, in European history: that antisemitism, though lately common elsewhere, is a thoroughly European phenomenon.

Will the strategy work?

The Commission’s consultation documents note that the ‘impacts cannot be measured ex ante’. They will be hard to measure ex post, too. It will be difficult to assess the role (if any) the package played in arresting and reversing the rising trend in antisemitism, if that is what happens, or the extent to which it limited a continued rise. It may encourage member state governments, who have greater powers and resources-per-citizen than the EU, to act, either in good faith or to demonstrate that they are good European citizens, and this would count as a success. But it is likely that the public, reached directly or through national governments, are not the only audience. Former Commission President Jean-Claude Juncker spoke of a political Commission, and though current President Ursula von der Leyen has emphasized the geopolitical, this is an implicitly (and only just implicitly) political move. For the Commission is not alone in seeking to define European civilization. In recognizing historic crimes, and making inclusiveness a European value, this strategy is directed at those – on the political fringes and in government – who would deny or minimize those crimes, and whose racial-religious definition of Europe is based on exclusion of the other.

2 Framework Decision 2008/913/JHA (on combating certain forms and expressions of racism and xenophobia). The five member states are Belgium, Bulgaria, Finland, Poland, and Sweden and the charge against Finland and Sweden is that they have not criminalized holocaust denial.

3 The Treaty of Paris (1951) sought to be ‘the basis for a broader and deeper community among people long divided by bloody conflicts.’ Jean-François Deniau, who wrote the preamble to the Treaty of Rome (1957) later said that it was ‘the only peace treaty I know’.